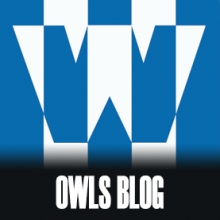 The first Owls blog of the close season sees a new Owls Blogger, Aiden Cusick, feature on Wednesdayite.com.  Aiden is a 22-year-old wannabe sports journalist with an obsession for Sheffield Wednesday and in his own words "talks a good game, plays like Kim Olsen."
Aiden's first blog some may say is good timing, some may say it's bad timing - but Aiden takes a view on recent Owls striker and new Barnsley signing Chris O'Grady.

"One man has perhaps divided Wednesdayites the most this season, and continues to do so despite not having played for The Owls since mid-January.

When Chris O’Grady was loaned to Barnsley at the end of the last window, many Wednesday supporters took to social networking sites to vent their anger at our manager for getting rid of our top-scoring striker.

This annoyed me for two reasons; Firstly, the manager being criticised was the same man who just days earlier was being praised for bringing in Leroy Lita and re-signing fans favourite, Jeremy Helan . Talk about football fans being fickle!

Secondly, the ‘top-scoring striker’ I was referring to, actually only had the same amount of league goals (4) as defenders Miguel Llera and Reda Johnson at the time. He managed just seven goals for us in the whole of 2011/12.

The issue that concerned most supporters though, was that of him being loaned to our relegation rivals. I can accept that. But at the time Barnsley were in dire form, whereas Wednesday were beginning to look up the table after an initial slow start to our first season back in The Championship.

Dave Jones always believed we would finish higher than Barnsley – he was right in the end, though only just – and that Lita would bring more to our side than O’Grady. They both managed six league goals during their respective loan spells.

Feel free to shoot me down but I don’t think O’Grady would have scored that many if he’d remained in blue and white. David Flitcroft is a man who knows him inside out – he was Keith Hill’s assistant at Rochdale during the 27-year-old’s time at Spotland – and he subsequently made him the focal point of Barnsley’s attack.

He believed in his man, Jones clearly didn’t, and history shows that O’Grady tends to work best when buoyed by a supportive boss – see last year’s Steel City Derby at Hillsborough.

People will criticise Jones for this side of his management – people will criticise him for not being Gary Megson too, but I’ll save that for another day – but few can argue that Lita is proven quality at this level (he scored just over one goal every three games for us, in a side which has created few chances all season) and I for one would rather see him in our starting line-up come August 3rd than our old friend COG. Wouldn’t you?

Some may disagree – yes, they scored exactly the same amount of goals – but without loaning out O’Grady, we wouldn’t have been able to afford not only Lita, but other players crucial to our Championship survival.

Players like Connor Wickham (whose goal earned us a crucial win at Leicester), Seyi Olofinjana (with whom we lost only one game in six, winning four) and Steve Howard (scorer of the opener in our win over Middlesbrough last week) may have been off limits had we not sacrificed the former Rotherham man.

And O’Grady’s success in S71 will surely benefit Wednesday financially. Barnsley’s survival gives them a better chance of affording the 27-year-old, while his six goals for The Tykes help raise his value, as well as his reputation. So in theory, even if they can’t afford him, someone else will.

This isn’t some kind of Jones love-in by the way, I’m fully aware this move could’ve easily backfired, but he always had faith in our survival and he was proved right in time.

He knows the division as well as anybody and I will continue to trust him regarding player recruitment as we approach the imminent release of our retained list and onwards in to the forthcoming campaign.

Here’s to an exciting summer – UTO."

The views expressed in Wednesdayite.com blog articles are those of the author and not necessarily the views of Wednesdayite, The Sheffield Wednesday Supporters Society Ltd, or anyone associated with the society.
Read 7539 times

Tweet
More in this category: « Owls Blog - (Not A Derby) The Owls vs. Doncaster Rovers Owls Blog - Wednesday Survive On Promotion Form »
back to top