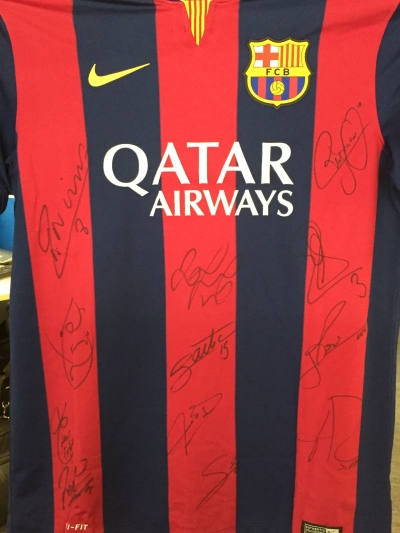 This Saturday, Wednesdayite weclome twenty guests associated with the Patrick O'Connell fund coming to the match against Middlesborough.

They will be bringing along signed shirts which have been donated by various clubs/players to the fund.

Wednesdayite have agreed to donate £1,000 to the fund to enable work to start on his unmarked grave and give one of our own former players a suitable resting place.

And you could both help the fund and bag a unique signed football shirt.

First up is a  Signed shirt by the Squad of Barcleona , the shirt was signed only last week by many of the squad who beat Manchester City 2-1 on Tuesday evening

The Patrick "Don Patricio" O'Connell Memorial Fund aims to repair the unmarked grave and resurrect the legacy of one of Ireland's forgotten football heroes.

For more details about the fund please CLICK HERE

The shirt is certainly impressive and will look great framed on any football fans wall. (see picture below)

Patrick O'Connell was born in March 1887 in Dublin City, Ireland. When he wasn't at work in Boland's Mills in Ringsend, young Patrick was developing his tenacious football style on Mabel Street, Drumcondra, in working-class North Dublin. He began his senior playing career at Liffey Wanderers (Dublin, 1908). At 21, newly married and wife expecting, O'Connell secured his first professional contract, moving north to Belfast Celtic. Paddy was a tough, uncompromising defender and it wasn't long until he sparked the interest of clubs in England. Barely a year into his Belfast stint, Sheffield Wednesday (1909–12) came calling. The move didn't go well, however. Paddy played twenty-one games in three years. His personal life was suffering as a result. Things improved after a move to Hull City (1912–14) in the second division. Regular football with Hull resulted in a call-up to the Irish national team. He played an instrumental role in Ireland winning the "British Championship" in 1914, with victories against England and Wales and a draw against Scotland, a game in which he played with a broken arm. The outbreak of The Great War was to hinder football activity in Britain and Ireland. However, it was during that period that O'Connell's footballing legacy was born. Sadly for his wife Ellen and four children, it was becoming clear that his personal life was going in the opposite direction to his professional life.

Patrick's playing career was on the rise and in 1914 he became the first Irishman south of "the border" to play for Manchester United (1914-19), signing for a substantial fee of £1000. As war spread across Europe, O'Connell was making a name for himself at Old Trafford. Within six months of joining the club he was given the captain's armband. It wasn't a golden era for United however, and it was the infamous "Good Friday Scandal" that would mark O'Connell's time in Manchester. The final game of 1914/15 season, at home to Liverpool, would go down as one of the most infamous in English football history. A "conspired" 2-0 victory saw Man United avoid relegation by two points. But the result was the subject of intense scrutiny, not least because of suspicious pre-match correct-score betting (practically unheard of at the time). It was also speculated that several inter-team meetings had taken place before the game. While his captaincy of the team put him in the spotlight, accusations of O'Connell's involvement in the conspiracy were eventually dismissed. Curiously, with his team 1-0 to the good, Patrick took a penalty which he shot "blatantly wide", suggesting that he intended to play no part in the conspiracy (although more cynical investigators suggested that he merely sought to dull the glare of suspicion). In any case, while avoiding the ignominy of a fine or ban, match-fixing would inevitably become part of the O'Connell saga. But his career would not be defined by scandal. He spent five years at Man Utd, albeit at a time when professional football was stalled by war. While still on the books at Man United, he guested for Clapton (Layton) Orient, Rochdale and Chesterfield. Following a move to Dumbarton (1919-20), Patrick would wind-up his playing days at Ashington (1920-22), the club that would also becoming his first managerial challenge. The story of Patrick O'Connell was born, although the "Don Patricio" chapter was yet to come.

O'Connell's remarkable managerial accomplishments in Spain would put him on the footballing map. In 1922, he became manager of Racing Santander (1922-29) on the north coast of Spain. While one can speculate as to why Patrick made the move to Spanish football, it may not be a coincidence that he inherited a managerial position vacated by Englishman, Fred Pentland. Whether by opportunism or good fortune, O'Connell had set the stage for his managerial legacy. He spent almost seven years in charge of Santander. When the offside rule was redefined in 1925, O'Connell became a proponent and pioneer of the "offside trap". Racing would become one of the founding members of La Liga (Primera Liga) during his final year in charge. His next appointment was in the Segunda with Real Oviedo (1929-31). Once again, he filled a position first held by Pentland. He would leave Oviedo the year before their promotion to La Liga and traverse the length of Spain, to the city of Seville and to Real Betis (1932-35). It was at Betis that a true account of the footballing genius would begin to unfold.

In 1935, O'Connell led Real Betis to their sole La Liga title to date, piping Real Madrid to the championship by one point. It was a monumental achievement, given that Real Betis weren't even considered the best team in Seville. O'Connell's defensive expertise was evident in the goals-against column - just 19 goals conceded in 22 games. However, a scandal was brewing! To win the title and deny Madrid CF, Real Betis would have to beat Racing Santander on the north coast on the last day of the season. The night before the game, or so the story goes, O'Connell visited some old friends in the Santander squad. Over a drink or two, O'Connell is rumoured to have said, "You've got nothing to play for tomorrow. You won't kill yourselves to beat us will you?" To which the reply came, "I'm sorry, Mister, but Madrid wants us to win. Our president, José María Cossio, is a Madrid fan himself and is offering us 1,000 pesetas per player if we win." And there the story ends. Whether old-fashioned small talk, or a casual attempt to gain an advantage, it appeared to matter little as Betis proceeded to trounce Santander 5-0 and lift the trophy. During his time in Seville, Patrick's personal life took a surreal twist. He met and married an Irish woman, not dissimilar to the woman he was still married to in Ireland. Neither woman knew of each other, or that they were both called Ellen! Despite his bigamous situation, he still managed to financially support his family in Ireland.

"Don Patricio" was now among the managerial elite. His extraordinary exploits in Andalucia had opened the door to arguably the biggest job in Spanish football outside the capital. Barcelona FC (1935-40) had acquired O'Connell's services. Some might argue that he was an opportunist in the face of social and political unrest, while others would suggest that he was a professional victim of war, or even a conscientious political activist. Whatever the case, just as the First World War had affected his playing career in Manchester, the Spanish Civil War was about to change the course of his managerial career. In his first season in Catalunia, he regained the "Campionat de Catalunya" and reached the Spanish Cup Final, losing 2-1 to Madrid. It was to be the last action on the pitch before war ravaged the country, and in particular the city of Barcelona. Things were falling apart for the Catalans - economically and culturally. In spite of the obvious dangers (Barcelona FC President, Josep Sunyol had already been executed by Franco forces), O'Connell was intent on standing by his team, and in effect nailed his political colours to the mast. To demonstrate his loyalty to Barcelona, he took a 33% pay cut, as did the players, in order to help alleviate the financial burden on the club. Barcelona, the city, was now in a chaotic state. The safety of players and staff could no longer be assured. Salvation was to come from an unlikely source - a Catalan businessman who had emigrated to Mexico, Manuel Mas Soriano. He invited Barcelona, at his own expense, to tour Mexico and the USA in 1937. The trip would act as a fundraiser, and a life saver. The reported value to Barcelona of the American tour was US$15,000 - a notable amount in today's terms. It is a contemporary belief that without the proceeds of the tour, Barcelona FC might not exist today. Romantic notion or not, there is little doubt that the returning Barça was not the same Barça that left, literally. Only four of sixteen players returned to Catalunia, along with four officials, including O'Connell. The money that had been secured from the lengthy stay abroad was deposited in a bank account in Paris. The depleted outfit returned to a Barcelona destroyed by battle. Football would play little part in their immediate future, although the institution that is Barcelona FC would survive thanks to the bravery, integrity and ingenuity of people like Patrick O'Connell. Following the cessation of hostilities in April 1939, he spent one further season at Barcelona, leaving in March 1940. It has been said by those close to Barça, by those who believe that the club is more than football, that to appreciate the significance of Barcelona FC is to acknowledge the legacy of Patrick "Don Patricio" O'Connell.

THIS BIOGRAPHY IS A WORK IN PROGRESS!...Want to know more? Watch the excellent TG4 documentary on the life of "Paddy Don Patricio" (see below).

Mr. O'Connell died destitute in London in 1959. To this day he is buried in an anonymous grave at St. Mary's Catholic Cemetery, Kilburn, London.

There are differing opinions on Patrick O'Connell, the man. They vary from rogue to visionary, from maverick to genius. But one thing is certain, his extraordinary life deserves to be remembered. This is the story of Patrick "Don Patricio" O'Connell...

The Fund has two initial objectives:

- to raise funds to build a memorial befitting of Patrick O'Connell at his place of burial in Kilburn, London.
- to build a monument of Mr. O'Connell at Belfast Celtic Museum, and in due course at each of the clubs he managed and played for.

The Guardian Online has brought the life of Don Patricio and the POC Fund to a British audience - The forgotten story of ... Patrick O'Connell, saviour of Barcelona