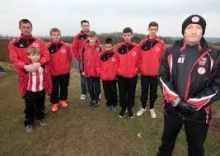 Star report Wednesday 18 March 2015
A junior football club in Sheffield is facing an uncertain future after all its equipment was stolen during a break-in.
Mosborough FC, which has a number of youngsters’ football teams, may not be able continue after all of its kit – including football nets, training cones and several bags of footballs – was taken by thieves.

Anything not stolen was smashed up
The club’s storage unit at the old Westfield School building on Westfield Terrace, Mosborough, was broken into and cleaned out after the offenders used a pair of bolt cutters to cut through a welded window frame.Under-15s manager Richard Turton said: “This season we have done a lot of events and bag packs to raise money, because we are expanding from two to three teams up to about eight.
“We have a big container which is used to store all the equipment.
“There is a window frame which has two padlocks on it and they have just cut a large hole through.
“They have obviously done a few runs to and from the unit.”
A dog walker spotted the burgled cabin and was the first to raise the alarm, contacting Sheffield Council, who then alerted police and the club.
The storage unit was not insured because the club cannot afford the insurance due to its remote location.
Mr Turton said: “It’s in open space, it’s not lit.
“We have tried to get the cabin insured on numerous occasions, but because of where it is, they want an astronomical amount of money.
“We are a junior football club and we just don’t have that kind of money.”The storage unit contained all the equipment the club uses to train its teams, as well as host home games.
The theft places the club’s ability to host its next scheduled home game on March 29 under threat.
Mr Turton added: “Training equipment, cones, football nets in bags, poles, bags full of footballs.
“There were six sets of nets in bags, which were new. So they have all gone.”
The manager admits the group will be ‘struggling’ unless something can be done to get the club back on its feet.
He added: “We are going to be struggling.
“We don’t have the money to just go out and buy new footballs and training kit.”
South Yorkshire Police confirmed it received a report about the break-in  and that it was investigating the incident.
Anyone with information contact police on 101.
END

Wednesdayite Member Nigel Short alerted our Chairman , Paul Holmes, to the article, asking if we could assist the club. After consulting with the rest of the board Paul contacted the Chairman of Mosborough FC (Juniors), Matthew Bradley, and after speaking to Matt agreed to fund the purchase of two sets of portable nets to ensure the games scheduled for this weekend culd go ahead. The club has limited funds in its own account and Paul arranged a same day transfer of  funds to enable Matt to pick the nets up from local company, Itsa Goal in Tinsley.
We will be meeting with Matt in the coming weeks to see what other help and  assistance they desperately need to replace much needed training equipment and ensure many young people in the South of Sheffield can benefit from playing football at their local grass roots club,
Read 6012 times