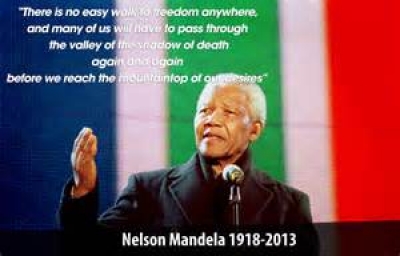 The announcement of Nelson Mandela's death was made by President Jacob Zuma at 21:50 on Thursday 5th December 2013 live on television speaking to the world.

One of the brightest lights in our world has gone out tonight.

To those who observed him closely, Nelson Mandela always carried himself as one who was born to lead.

The Mandela who led the African National Congress into government displayed a conspicuous sense of his own dignity and a self-belief that nothing in 27 years of imprisonment had been capable of destroying.

Although Mr Mandela frequently described himself as simply part of the ANC's leadership, there was never any doubt that he was the most potent political figure of his generation in South Africa.

"I have cherished the ideal of a democratic and free society in which all persons live together in harmony and with equal opportunities. It is an ideal which I hope to live for and to achieve. But if needs be, it is an ideal for which I am prepared to die."

Nelson Mandela, the former South African president whose stubborn defiance survived 27 years in prison and led to the dismantling of the country's racist and brutal apartheid system, has died. Mandela was 95 years old.

President Obama spoke shortly after Zuma's announcement, praising Mandela as a man who "bent the arc of the moral universe toward justice."

Mandela had a number of issues with his health in recent years including repeated hospitalizations with a chronic lung infection. Mandela had been listed in "serious but stable condition" after entering the hospital in June before returning to home to receive continued medical care.

In April, Mandela spent 18 days in the hospital due to a lung infection and was treated for gall stones in December 2012.

Mandela's public appearances had become increasingly rare as he dealt with his declining health.

His last public appearance was in July of 2010, when he attended the final match and closing ceremonies of the soccer World Cup held in South Africa.

The Football League has asked its clubs to hold a minute’s applause ahead of matches this weekend to celebrate the life of Nelson Mandela, who died yesterday at the age of 95.

Consequently, Sheffield Wednesday are making supporters aware of this tribute ahead of the Sky Bet Championship game against Nottingham Forest on Saturday.

Football League chief executive Shaun Harvey, said: “Nelson Mandela was an inspiration to millions and his determination, courage and forgiveness marked him out as a truly great man.

“We are delighted to give clubs and their supporters the opportunity to pay their own tributes to Nelson Mandela and recognise his extraordinary legacy.”

This email address is being protected from spambots. You need JavaScript enabled to view it.

More in this category: « Report of Members Meeting Programme Notes - Blackburn Rovers »
back to top